Traveling with Trans Siberian railway – tips for buying a ticket

In this post, we would like to summarize a few tips that might be useful before your adventure with Trans Siberian railway. We will focus on buying tickets, choosing a carriage and seat or eating in a train. We hope, that our tips will be useful for you :).

We purchased tickets for the Trans-Siberian Railway in advance on-line on the official website of the Russian railways www.rzd.ru. We read on the internet that tickets can be purchased no earlier than one month in advance. However, at the time of purchase, we found that this information was no longer valid, as the system allowed us to buy tickets for 40 days in advance (this fact caused the best seats to be occupied :/). The official website is in Russian and English language, but there are some options missing in English version (once the English version showed us other times of train departures).

We printed all the tickets at home and exchanged them for the official ticket at the railway stations in Moscow (possibly you don’t have to exchange the tickets and the printed ones should be sufficient). We started from the Kazansky railway station, which is very clear and quite modern. Don’t expect ticket attendants to speak English, but with the help of a translator and basic phrases it’s not so hard to understand (just show the printed tickets at the ticket office and say “Davaj bilety” :D) 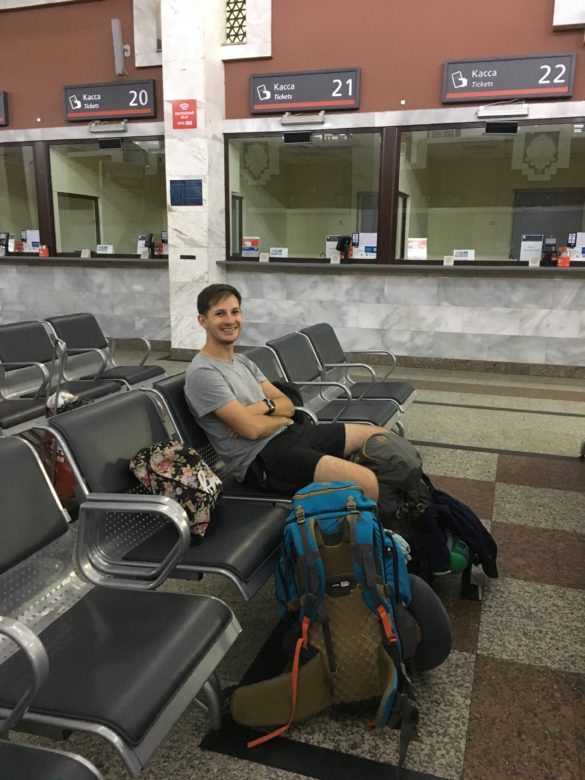 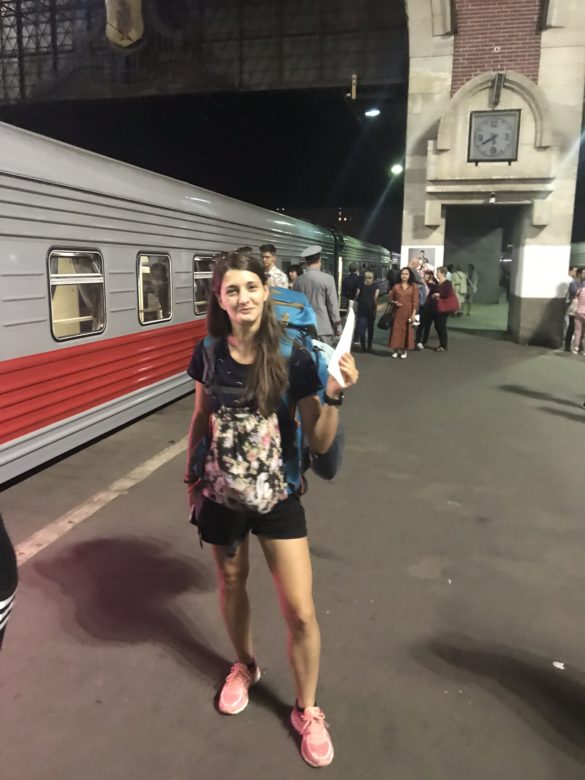 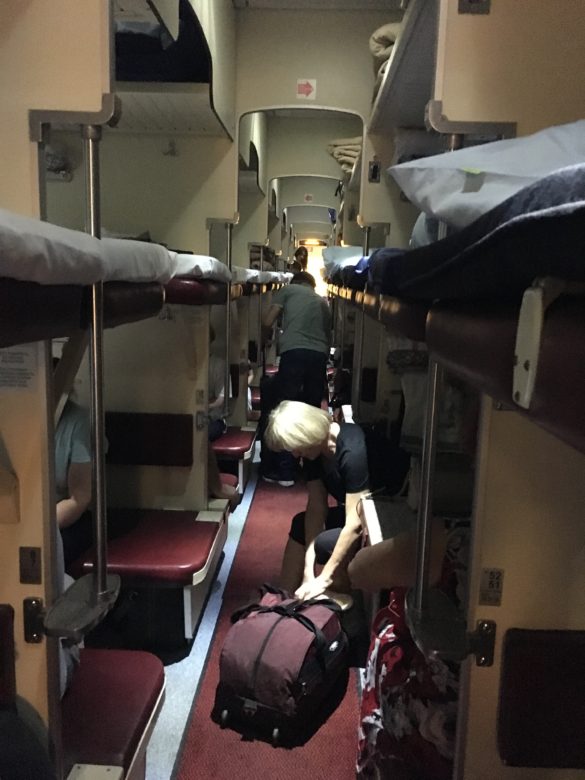 If you are planning to get off the train and look around the cities along the route, be careful when buying tickets for your departure time. We have passed through four time zones and the time on the website can be displayed either in Moscow or in local time (the time of destination). However, the default setting is in local time and in parentheses it is stated how many hours the time differs from Moscow.

If you are traveling in group (more than 2 people) we recommend buying the lower and upper bed. There is not much space at the upper bed but it is nice to climb down and sit at lower bed. We do not recommend buying places in the aisle, as someone will always walk around you. It also means that you can’t stretch your legs while sleeping. Laso don’t book bed near toalets. The smell it is not so bad (but still it smells there) but there are queues for toilets (especially morning and evening), which can be annoying. 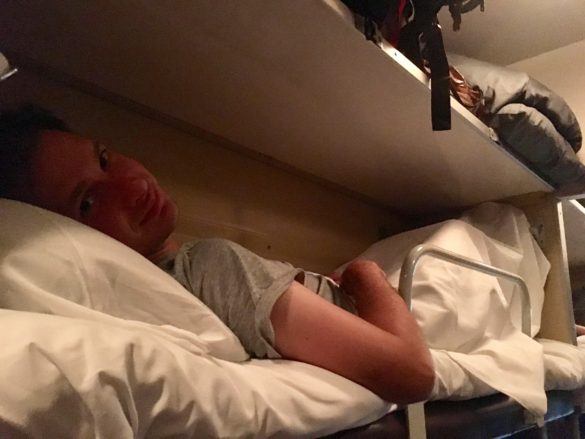 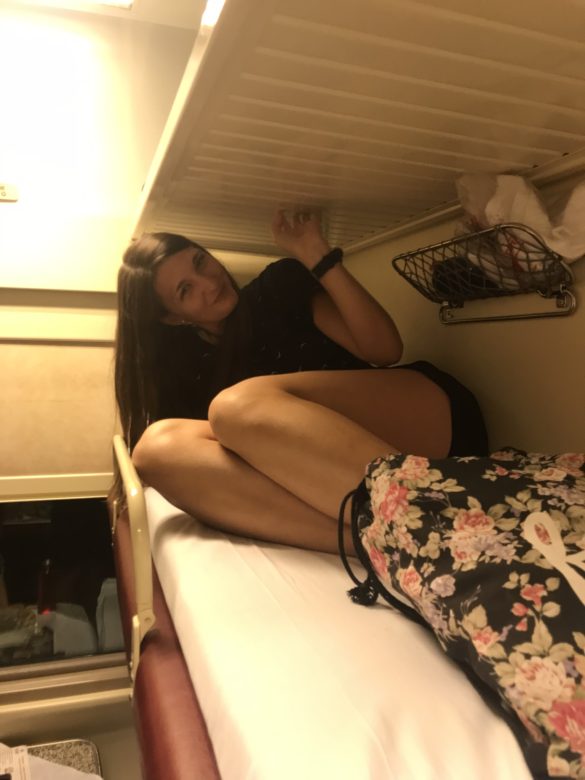 Which carriage is the right one? This depends primarily on your financial capacity or preference for comfort and privacy. Basic options include De luxe sleeping (some trains only), first, second, third class with open sleeping and carriage with seats. We tried to keep the budget as low as possible, so we tried carriages with seats (the cheapest option) and the third class called 3-cl. Open sleeping (Russian plackarta).

Looking from the outside first and second class seemed really good, but their prices can be up to 6 times higher than the third class. In a better class there are separate cubicles, more space, one gets water, there is a shower and there are certainly toilets in better condition. In the third claas there are no separate cubicles, but the space is still relatively large. Everyone is also entitled to a bed sheet, bed linen and towel, for free! Most trains also have electrical sockets to charge and the train from Moscow to Kazan has even a wifi connection. And we must to say that even the third class is really clean! 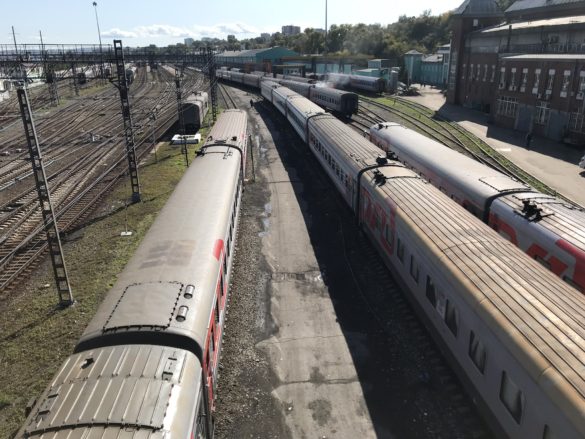 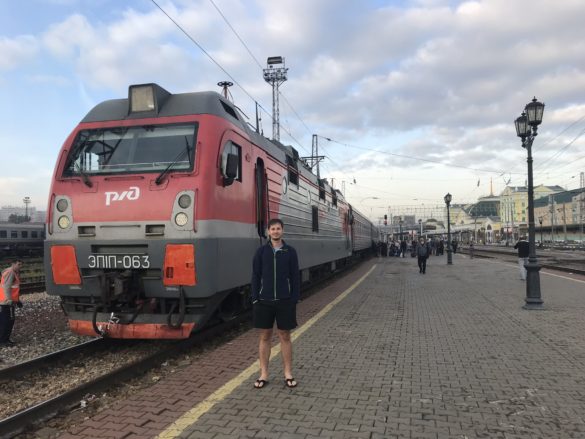 We regret this choice the most! The seats are very uncomfortable, so after only a few hours of driving, our butts cursed us. Although there was plenty of leg space between the seats, we were desperate and didn’t know how to sit. The toilet is only basic equipped. You have to stand on the toilet, which Anet found dangerous after the carriage shaked and she fell from it. The toilet is not very well maintained. We recommend sitting car only for short distances – no more than 4 hours. 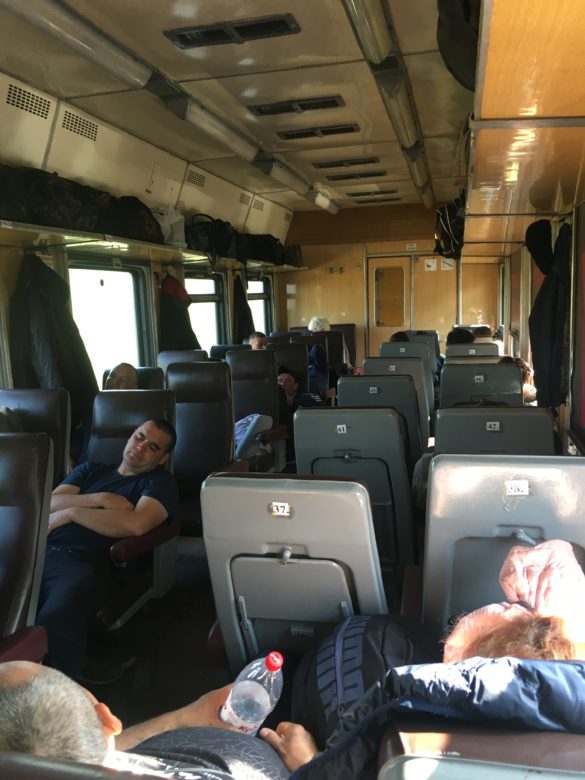 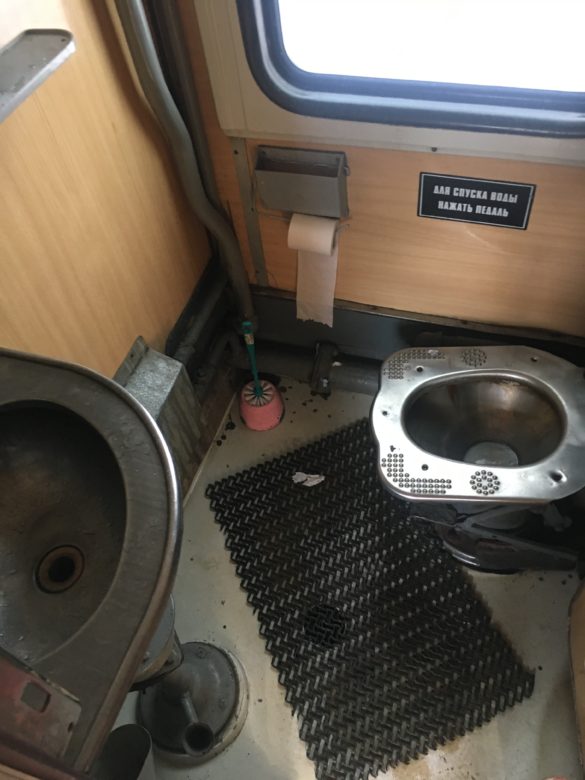 This class was a pleasant surprise for us. Reviews on the internet were rather negative to neutral and did not impress us best. The third class is ideal for undemanding travelers who do not mind the presence of strangers and are not afraid to communicate with Russian citizens. We have never encountered someone who feels weird, drunk or aggressive. Usually we met families with children, a bunch of friends or men traveling from work or home. The lights were switched-off around 22:00, which was an order to sleep and there was really calm throughout the carriage. But we recommend earplugs because snoring echoes in the wagon. The bed consists of a classic seat and a mattress on it. Although it doesn’t seem like luxury, we slept well. 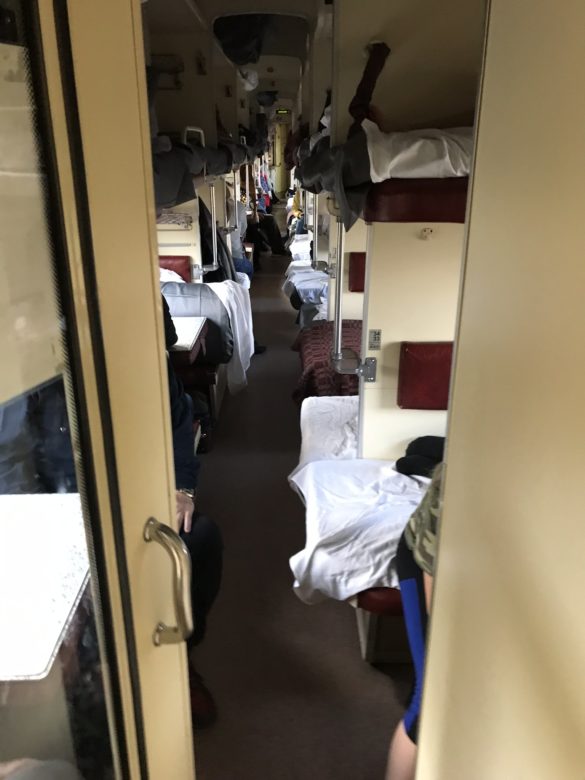 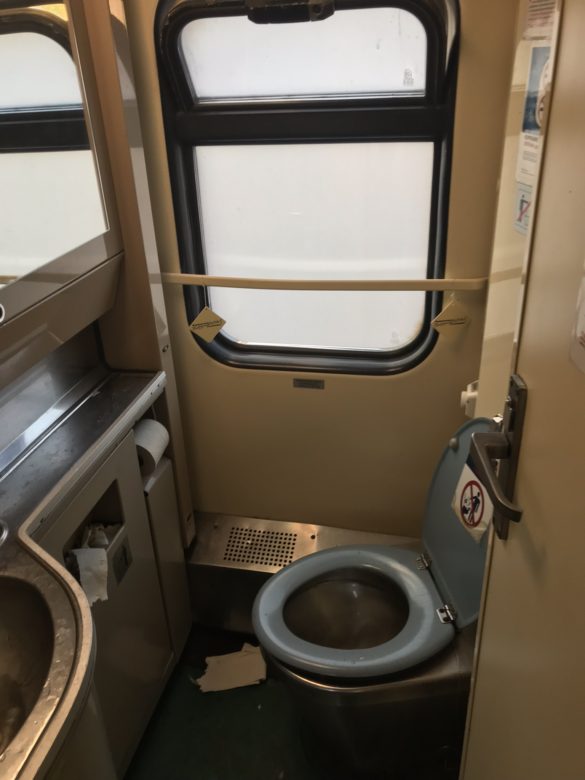 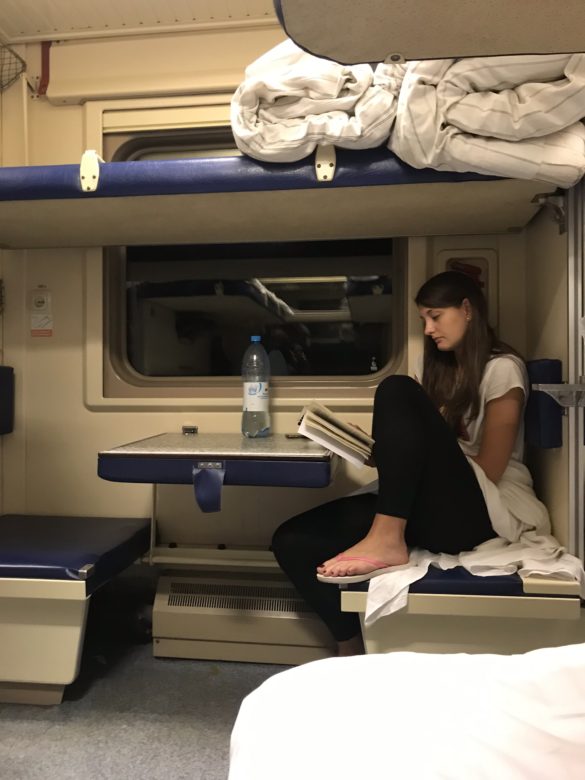 Are you wondering if you will not starve in the train? Don’t worry about it, there are several ways to get food. The first is the availability of hot water, ideal for instant noodles and brewing tea or coffee. The second option is to buy food directly in the carriage. At the time of breakfast and lunch, shop assistants with various stuffed and ordinary pastries came to us. There is also the possibility to buy refreshments on the train, which include the aforementioned instant noodles, biscuits, candies, nuts and others. The last option is dining carriage. 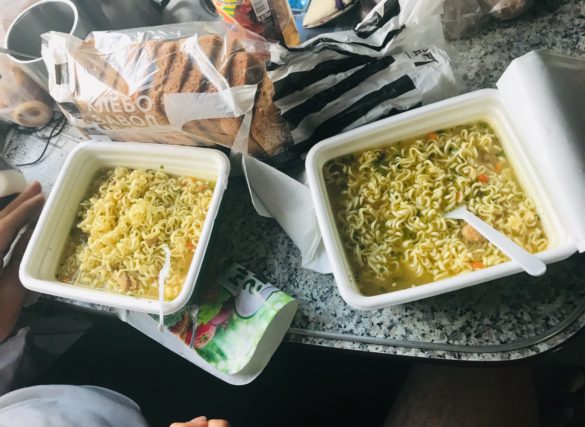 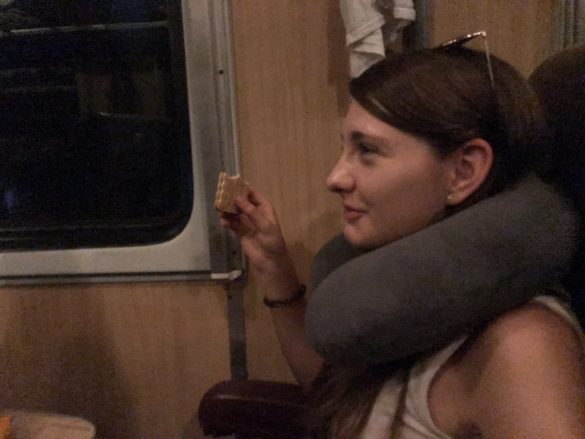 If you want to take away a souvenir other than a photo, you can buy various souvenirs from the conductor. Most popular were mugs, but don’t worry there ware plenty of them.

Moscow – first destination on our journey around the world