Tom promised me for a few years to take me to Taiwan and travel there together 🙂 He finally fulfilled his promise (despite the complications due to the corona virus) and led me through a country that completely surprised me and got under my skin. We decided to travel around Taiwan by car because it is a relatively small country and we wanted more flexibility in exploring nature.

Car rental in Taiwan is quite expensive compared to the countries we visited in previous years. We do not recommend renting a car at the airport from classic companies such as Avis or Budget, as their prices are too high. After our internet research, we found two companies in the city center that had substantially lower prices and good ratings. Their name is:

We finally rented a car for a week for 1000 TWD / day at a car rental OK because of the lower price. The lady was very nice, spoke English and was willing to bargain for the price. We got a new car and even without deposit 😀

Our initial plan was to rent a motorbike in Taiwan, but due to the complications with renting a bike in Taipei (some companies don’t want to lend to foreigners for a longer period) and bad weather, we chose a car. 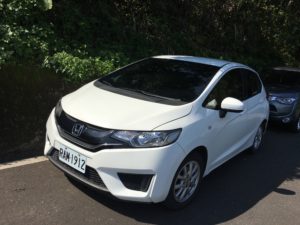 Driving a car in Taiwan

Driving a car in Taiwan is safe and simple as most companies lend automatic cars. Drivers are considerate on the island, complying with traffic rules and signs. Outside the city, we honestly did not meet many cars, especially at night we had roads for ourselves. Parking was a bit worse, as there were sometimes insufficient parking spaces in towns or quite expensive parking spots, In the end we always managed to park on the street, which was also the cheapest option. It works like this: you park your car but you don’t pay for anything yet. Man rides on a motorbike around city and put a ticket on your window, then they put stamps every hour. You will pick up this ticket and pay for parking, for example, in store 7-11.

What drove us most about driving in Taiwan was a lot of traffic lights that sometimes didn’t even make sense or speed limits. Imagine that you have a straight road for yourself and you have to drive a maximum speed of 60 km/h. That was crazy for us.

Sleeping in car in Taiwan

Accommodation is quite expensive in Taiwan, so we decided to sleep inside of our car most nights. It was the best solution when we wanted to be the first on the place. The advantage of our Honda was that it was possible to put down the seats and lie down in the trunk. We really don’t know if it is legal to overnight in car in Taiwan but we never had a problem with it and sometimes we met other people sleeping in the car or caravan. In Taiwan there are plenty of car parks with toilets and close to the sea, which was perfect for sleeping. Worse was that we couldn’t find campsites where we could take a shower. Best solution was to visit the hot springs and bathed in the river 😀 You can read more about our roadtrip around Taiwan in the next articles 🙂

5 useful things to know before traveling to Vietnam