Guide how to travel by train in China

China has one of the most developed railway networks in the work where speed trains for commercial using have even maximum speed up to 305 km/h. Trains are among the cheapest and almost fastest means of transport (the plane is of course faster) and we traveled with them from Beijing to Shenzhen (North to South).

How to buy a ticket for Chinese train?

Be aware that train tickets sell out fairly quickly, especially on weekends and during holidays. Therefore, we had to buy some of them 2 months in advance. We have found a website (application) Trip.com which is clear and easy for orientation. Its only disadvantage is that you have to pay a fee. When you are in China, you have to show the “code” in the ticket office at the train station, which was sent to you by email and after you will receive a classic paper ticket.

Then we bought the rest of the tickets at the train station in China (we wanted to avoid the fee). We have always prepared and translated in Chinese: from which city and station and where we want to go, what time and what beds we want, types of seats. 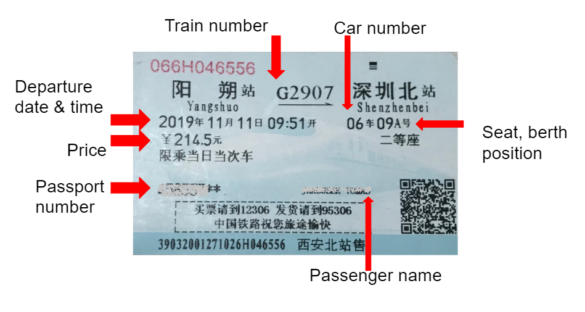 Which type of chinese train to choose?

Fast trains are much faster than normal trains, but they are also two or three times more expensive. That’s why we chose overnight trains for longer distances, and on short distances we took the high-speed train, mainly because of the experience! We drove at a maximum speed of 305 km/h.

Which type of carriage to choose on a Chinese train?

For the short distance we used a hard seat coach. Normal trains has only disadvantage that people can buy also standing places so it was very overcrowded. We have chosen a hard sleep coach  for longer distances. There are up to three-storey beds in Chinese trains, and as a rule, the lower beds are more more expensive than higher beds. We always bought the lowest and highest bed, because Tom wanted to be alone upstairs and at the same time it was comfortable to get down on my bed and have breakfast together. 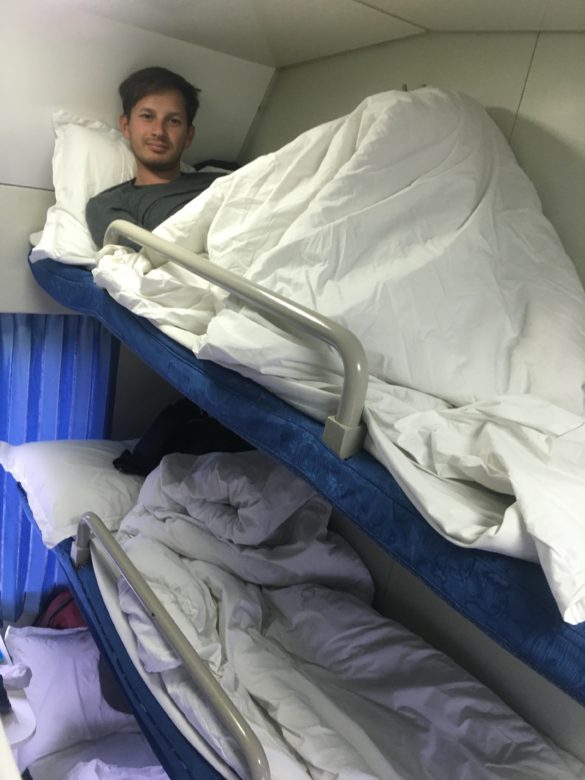 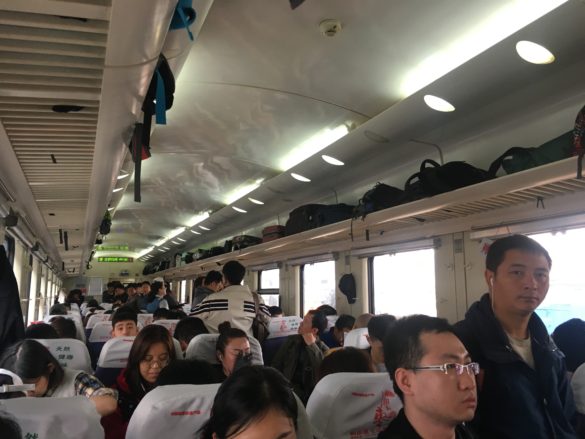 Chinese trains are safe, you will feel more like a celebrity and people will be interested and watching you. We felt like celebrities mainly in an open seated coach,

Are there electrical outlets on the Chinese train?

This surprised us the most about Chinese trains! There are electrical outlers, but they are located in the corridor and there were about 4 drawers per coach, which is very few. There is also no Wifi in Chinese trains.

Watch out for the train station!

Usually there are more train stations in cities, so always check where you are going. Mostly high-speed trains run from a different station than the classic trains. At the train station it works almost the same way as at the airport. You sit in the waiting room close to your Gate and wait until they start calling you for boarding and check your ticket (yes tickets are checked already at the train station!). 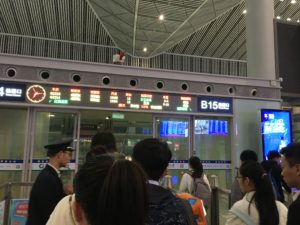 What things I cannot take with me on a Chinese train?

This may surprise you, but with Chinese trains it works almost the same as with planes! When entering the train station you have to pass the security check! Classically, weapons, explosives, knives, acids are forbidden, and they also took us nail clippers, deodorant and Anet had to prove before them that she had nothing harmful in the water bottle and drink water in front of security control 😀

How to backpack for trip around the world

Flying drone in China? All you need to know about rules and registration