Our Taiwan roadtrip started in Taipei, where we borrowed a car from company OK cars, bought food and water supplies in Carrefour and headed southeast. In this article, we will describe the places we visited, our greatest experiences day after day, and of course we will provide some recommendations 🙂

We drove from Taipei, we set out to Shiding Thousand Island Lake. It is a huge water area, around which are tea plantations and nice hiking trails. But we honestly did not like this place so much. We went on a 3 km long trail through the forest, looked from the lake viewpoint and continued.

Shifen appeared on our route by mistake, as Tom confused the name cities of Shifen and Jiufen. But when we got there and drove there an 1 hour we deciced to check the Old street. The most famous tourist attraction is the release of lanterns on the railway line and the waterfall Shifen. 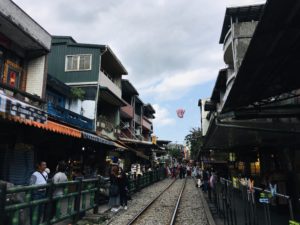 Finally, our last stop was Jiufen, which was another disappointment. Tom warned me before, but I didn’t believe him because the photos were the opposite. Unfortunately, it is a city full of tourists and souvenir shops. We also did not buy food because it was overpriced. For the first time we also smelled the odor of the famous local specialty stinky tofu! The smell is really bad and so strong 😀 The photo that made the city famous does not describe the city as a whole. Plus, you have to buy overpriced tea to take the photo, nothing for us. We were most impressed by the Buddhist Temple 九份 青雲 殿, located on a hill about 2 km from the city center. It was huge, beautifully decorated and nobody was there! In the evening we moved and slept by the cliffs of Ch’ing-shui. We found a quiet parking lot with toilets near the viewpoint, which was ideal. The first night in the car pleasantly surprised us and awakening near the cliffs was great 🙂 In the case of interest, this is a parking lot 匯 德 景觀 步道.

To our surprise, we woke up at 8 am and there were already cars standing in the parking lot and the first tour bus full of tourists arrived, After breakfast and morning hygiene, we finally went to the view of the Qingshui cliff, which was really close to the parking lot. The view was beautiful, especially the turquoise blue waters off the coast. Originally there was a way to the second prospect, but at present it is closed (it is probably dangerous).

We wanted to see the cliff from the beach, but unfortunately the stairs to it were also closed. We did not give up and finally we found our way to the beach (崇德 礫 灘). There wasn’t view of the most beautiful cliffs, but at least something.

Taroko national park is one of the most visited national parks in Taiwan. But we made one mistake and did not find out in advance that we needed a permit for the most famous hiking trail, You have to apply for it in advance and at least two weeks before the planned hike. We finally walked along the Swallow Grotto Yanzikou Trail and Shakadang Trail. Both were simple and relatively short. Then we went to see the symbol of national park called Changchun Shrine (a rocky waterfall flowing through the shrine), and we also looked at Budong Temple.

In the end we rode to Lisong Hot spring, where we slept somewhere on the hill. We wanted to be close to hot spring and be the first there!! 🙂