In the morning we picked up Matous and Victoria in Taitung and headed for Kenting National Park. Along the way we stopped at Longpan Park, which offers a stunning sea view. But there was a windy and we saw the coming rain, so we did not hesitate to continue further in south direction. Our next stop on the route is Taiwan’s Southernmost Point. Not far from the southernmost point is the Eluanbi lighthouse and the adjacent park, but we did not go inside because of the entrance fee (60 TWD).

We finished our fourth day with swimming on the beach called White Sand Bay, which has amazingly turquoise water. Despite the cold and bad weather, we simply could not resist and went for a swim!  It is said to be the most beautiful beach around Kenting and we can confirm that. In the evening we stayed in Kending and enjoyed the Night market, which was 2 km long. 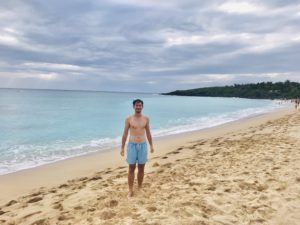 The next morning we climbed the highest mountain (or rather hill) in Kenting. It was an adventurous journey because it was raining all the time, we walked through the mud and jungle, and we got lost a few times. In the end, we really reached the summit 😀 On the way back we chose a simpler path that led through the cemetery, but at least we could see how Taiwanese cemeteries look like. Anet thought from a distance that it was a cottage area …:O 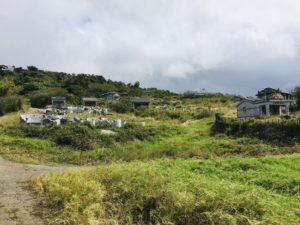 On the fifth day we missed much because of the morning climb to Kenting’s highest hill. We arrived at the Buddhist monastery at Kaohshiung called Fo Guang Shan at 4 pm and we hadn’t enough time to go around and see everything. You can find there Buddha statues, several temples, pagodas and large gardens. They measured our temperature because of coronavirus Because of the corona virus before entering each temple, but at least we went through a medical check 😀 The funny was that we found Matous walking and leaving the area with some strangers (his new friends) DD But he did not betray us and we arrived at the hotel together 😀

In the evening we went to see the most beautiful subway on the island. It is called Formosa Boulevard and can be found right in the center of Kaohsiung. You can see there unique light decoration, designed by an Italian artist. 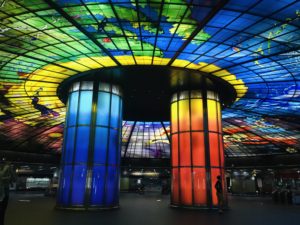