Due to the fact that it is currently almost impossible to see orangutans in the wild on Borneo, we had to go to the town of Sandakan. From there, we visited their rehabilitation center in Sepilok, where is created for them a nature reserve.

How to get to Sepilok from Sandakan

Sepilok is located about half an hour from Sandakan. You can either get here by taxi (approx. 40 MYR, we recommend downloading and using the Grab) or by bus, which costs 6 MYR and departs from the Mini bus station (Lebuh Dua Street, the bus waits close to at the Nature Hotel). You can also get there by other city buses, which do not stop directly in the Centre. The first bus from Sandakan leaves at 9 am and the last from Sepilok leaves at 4 pm.

How it goes in Sepilok, what to expect

First of all, you have to store all your things in lockers. Then you buy a ticket and go searching for orangutans. We went to see feeding at 10 am, because there should be the highest chance to see orangutans, but the opposite was true. Only macaques came for feeding and no orangutan showed up. What can be done, we continued.

We came to a building (outdoor nursery) where were climbing woods and ropes for orangutans and we finally saw them for the first time! We saw only about 6 of them, but at least something 🙂 We walked around the circuit twice and the second time we finally saw orangutans jumping on a tree and playing in the wild. But it was around 12 pm and we had to leave because the park was closing for an hour. In the afternoon, however, it opens again until 4 pm. So the purchased ticket can be used twice a day and you can return again in the afternoon. But the morning experience was enough for us, so we decided to go back to Sandakan. Due to the coronavirus, they reduced the number of buses and transport that usually runs at 12 pm did not come. So we walked to the main road (about 4 km) and waited at the bus stop (address is VXQ2+RQ Sepilok, Sandakan, Sabah, Malaysia) for the first bus that went in the direction of Sandakan. We paid 5 MYR so it was even cheaper 🙂

Best things to do and see in Sandakan

Sandakan has disappointed us terribly, honestly if you do not want to visit the surrounding overpriced islands (Sipadan, Turtle island ) or relax in the hotel FourPoints by Sheraton, then it is not worth staying here. But I got a stay at this hotel as a birthday gift from Tom so we spent a few days here. FourPoints by Sheraton Sandakan was amazing! Excellent buffet breakfast, swimming pool overlooking the sea and sunset was a terrible romance and there was also a gym 🙂 We even extended our stay in it, because due to the corona virus began to cancel our tickets and we did not know what would happen to us. We drove literally in 5 minutes 12 … exactly 19.3.2020. The day after Malaysia began to close, hotels were not allowed to accommodate tourists and slowly all domestic flights began to be canceled (fortunately we had priority as foreigners and got to the last one). 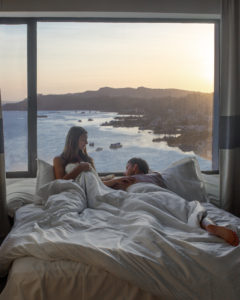 You can get from Kota Kinabalu to Sandakan by bus (cheaper option) or by plane (more expensive but faster). We recommend transport by plane for those who do not like serpentines, as you will not avoid them along the way. Tom even almost vomited 😀 If you want to go by bus you have to buy tickets and travel from Inanam Bus station Terminal (Bas Bandaraya Utara).

The transport from Sukau to Sandakan is more complicated, but they will be happy to help you in your accommodation. Every morning, a man with a van drives from Sukau and he is willing to transport people. This transportation should cost 50 MYR per person. For more adventurous people, we also recommend hitchhiking. It took us about an hour to stop somebody, but we managed to come across a gentleman who drove all the way to Sandakan!