The ultimate guide to Lake Baikal

Lake Baikal is must see stop on Trans Siberian railway and we have for you useful guide with tips and best things to visit there. It is located in the Republic of Buryatia and the Irkutsk Region. It is the deepest lake in the world and contains many species of plants and animals that you will not find anywhere else in the world. So let’s explore it!!!

How to get from Irkutsk to Lake Baikal by bus

There are several ways to get to Lake Baikal. We first went to the Olkhon island, specifically to the city Khuzhir, where we went by minibus from Irkutsk and a short distance also by ferry. We bought the bus tickets the day before our departure at the bus station for 533 Rub/pers for the island and 1000 Rub for the return to Irkutsk (prices depend on the carrier). We later found out that tickets could be bought online, but we  still prefer the paper version in Russia. When we got on the bus, the driver cautioned us by 300 Rub for 2 luggages, but what we could do…

We boarded the minibus and headed towards Olkhon. We passed by the autumn-colored forests and we cannot wait to finally see the waters of Lake Baikal. After about two hours of crazy driving (the driver was not really worried about our safety) we had a 30-minute break for refreshments and toilets. Then we drove again and we entered the ferry and got hungry. But having lunch on the boat wasn’t the best idea, since we had to hide our toasts from seagulls. We felt a little bit like in horror movie “Birds”, but we made it and our eyes were alright. Already on the ferry we felt like on holiday by the sea. The lake is huge which gives him a sea tint. After about 20 minutes by ferry we got back to the minibus and headed towards Khuzhir village. 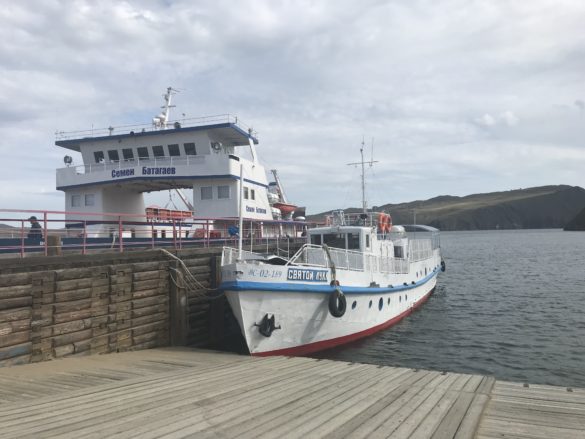 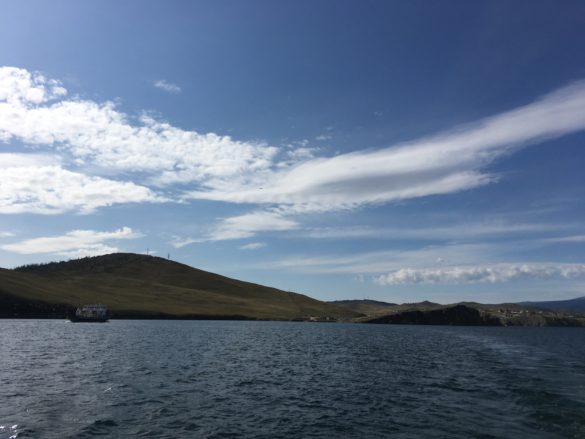 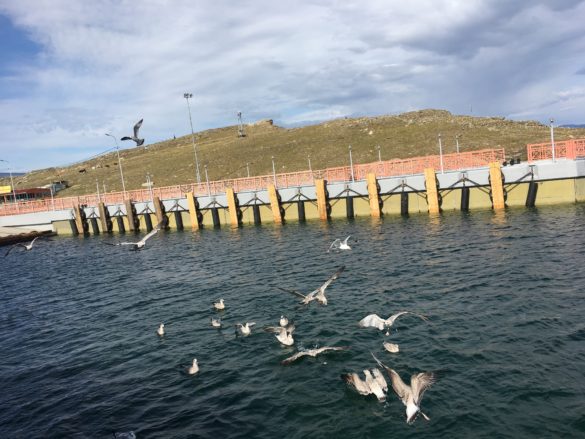 There are no paved roads on the island, which, combined with the driver’s quick ride, caused us to fly from the side to side in the minibus. We were most worried about our electronics that eventually survived. The driver dropped us off at bus stop that we would never have found without the road sign. 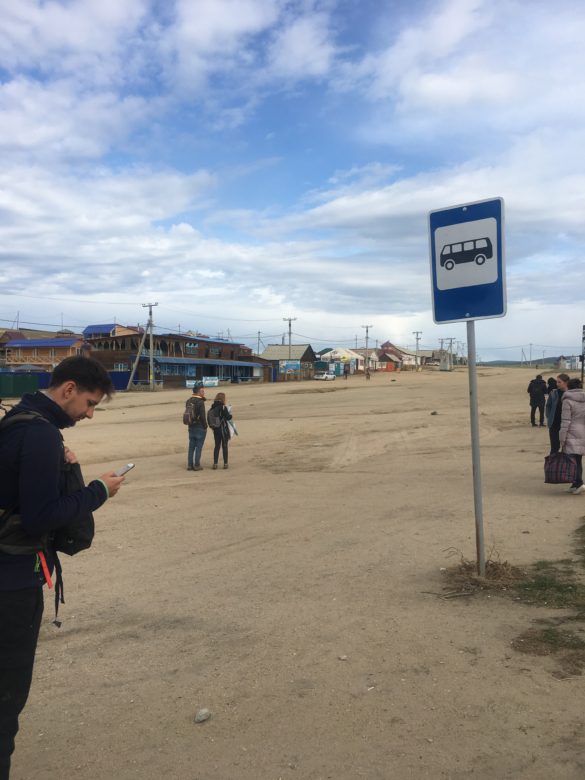 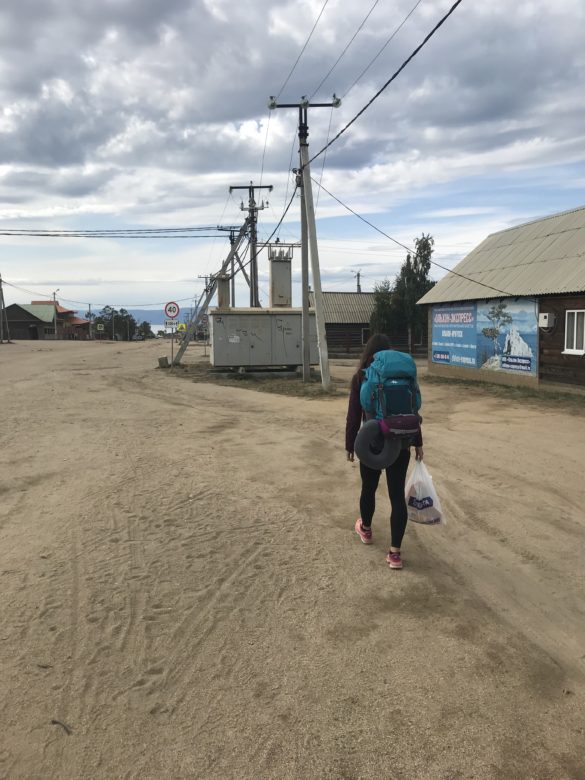 Where to stay in Khuzhir

We found our accommodation via AirbnbAirbnb . There are many options from luxury hotel to budget cottage. You can usually buy a trip around Olkhon island in your accommodation or on the main street of the village.  Lady from our guesthouse offered us a trip to the north of the island – Cape Khoboy for 1400 Rub/pers (included 4 stops on views and lunch), but we decided to do a smaller price survey in the city before we take it. But our research has shown that other companies are offering the same trip for 1400 – 1500 Rub so we finally chose Tanya. 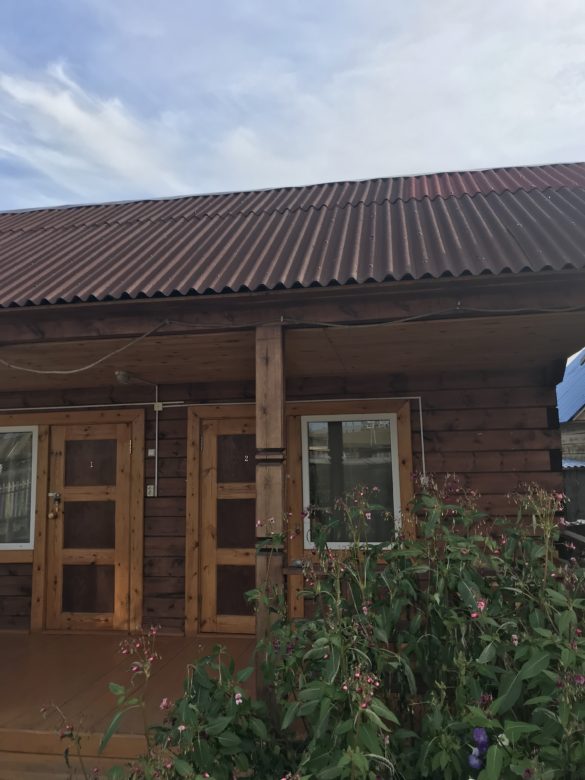 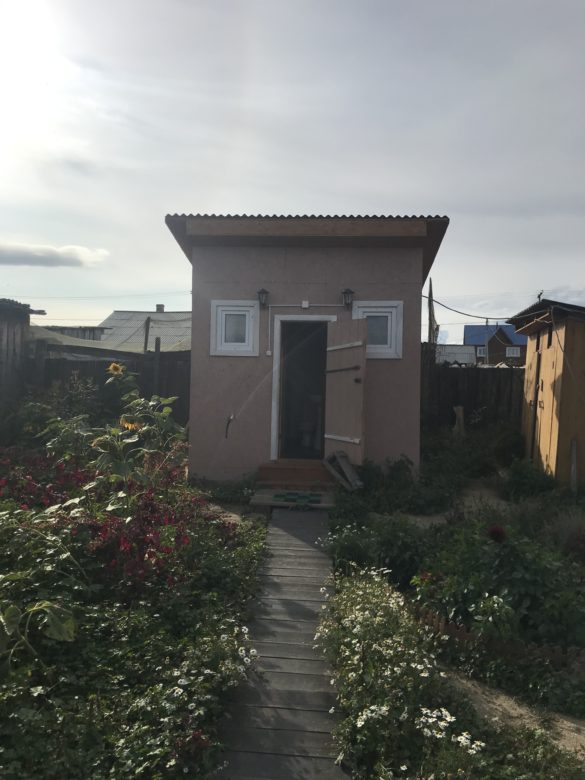 Top things to do/see on Olkhon island (in Khuzhir)

1. Watch the sunset next to Shaman Rock

We ended our day with watching a sunset next to Shaman Rock. But the romance was spoiled by many Asian tourists with tripods and huge lens fighting for the best photo. But the sunset was amazing and worthy to see! 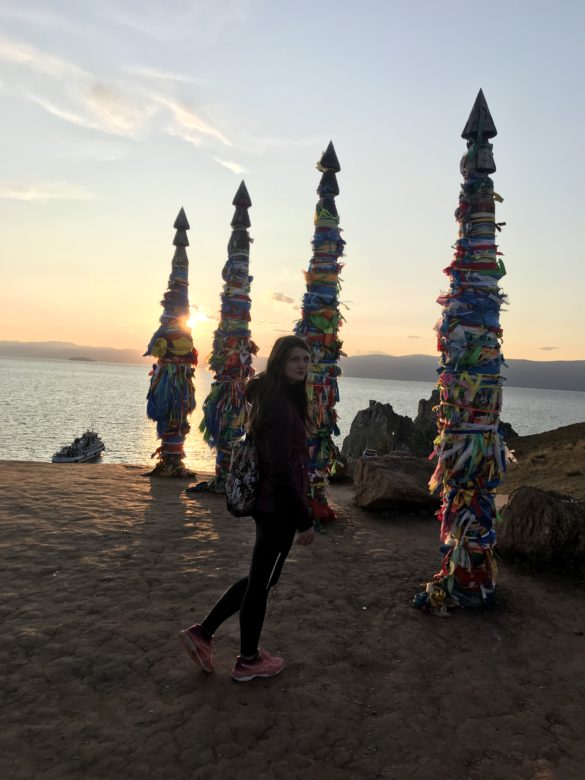 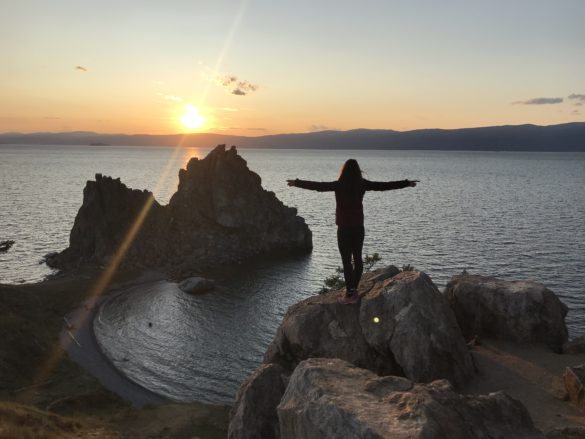 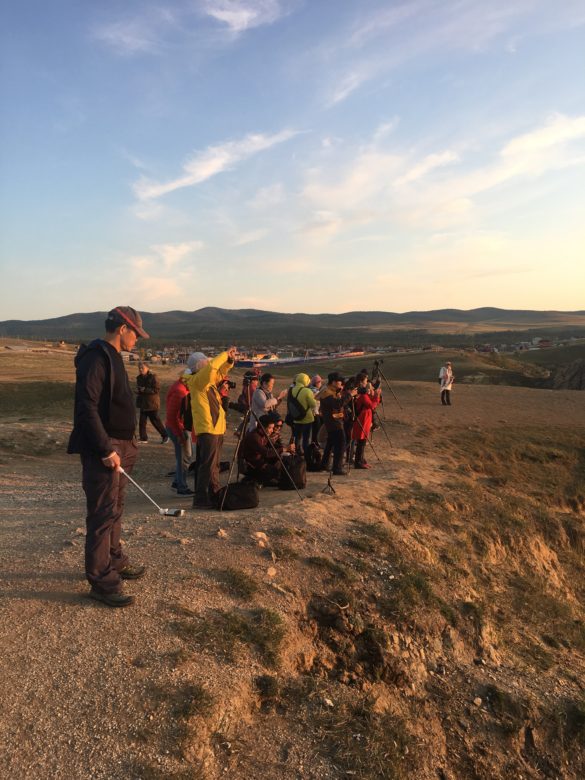 We headed to Cape Khoboy at 9:50 am with a russian “luxury” car UAZ Buhanka. Who does not own one it in the village as if does not exist. The road to the north was … well … crazy..so we understood why they own 4w cars. But our driver was a nice, quiet, sympathetic man. 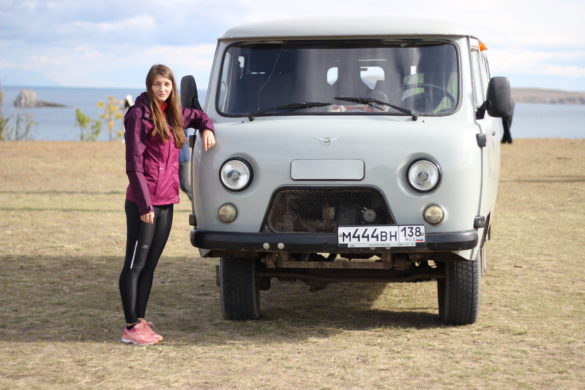 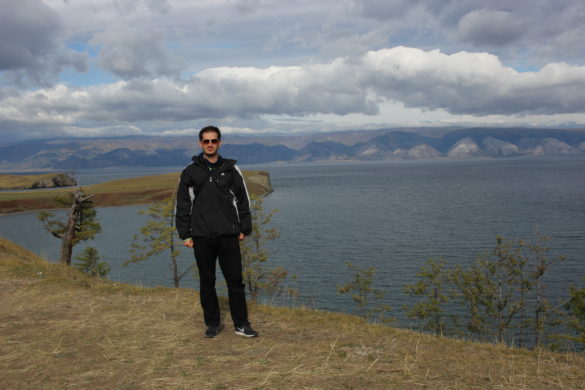 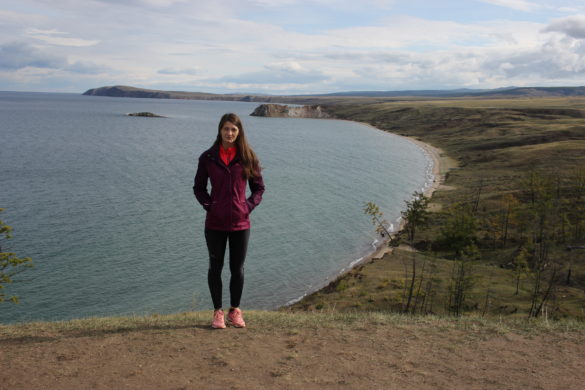 After two hours of driving, we arrived at our main destination, Cape Khoboy! It is unique place that is further enhanced by the shamanism of the locals. Olkhon Island is even the main center of shamanism. The active spots of faith can be identified by colored ribbons on stones, trees or wooden sticks. During our pause, we managed to take a lot of beautiful photos, we flew with our drone and Anet managed to offend a group of Asian tourists, because during the dressing up she revealed almost everything. 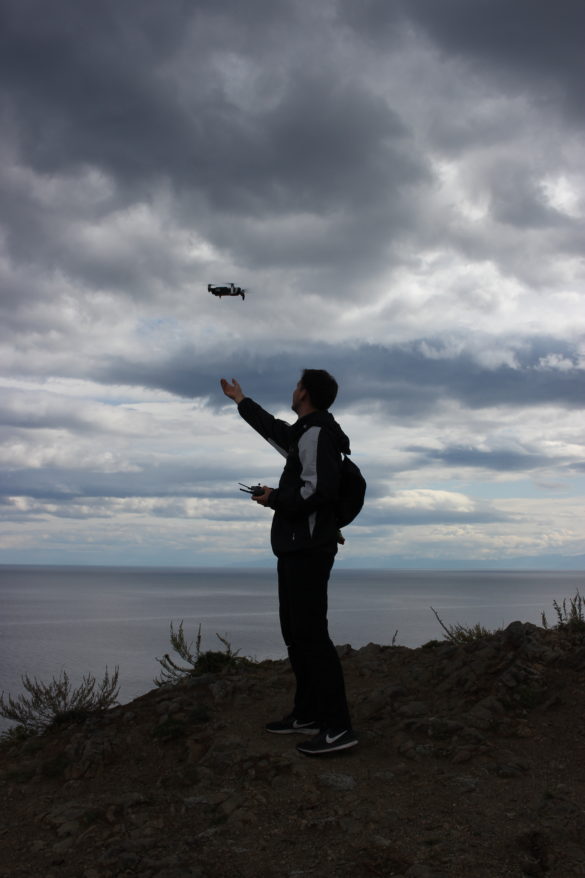 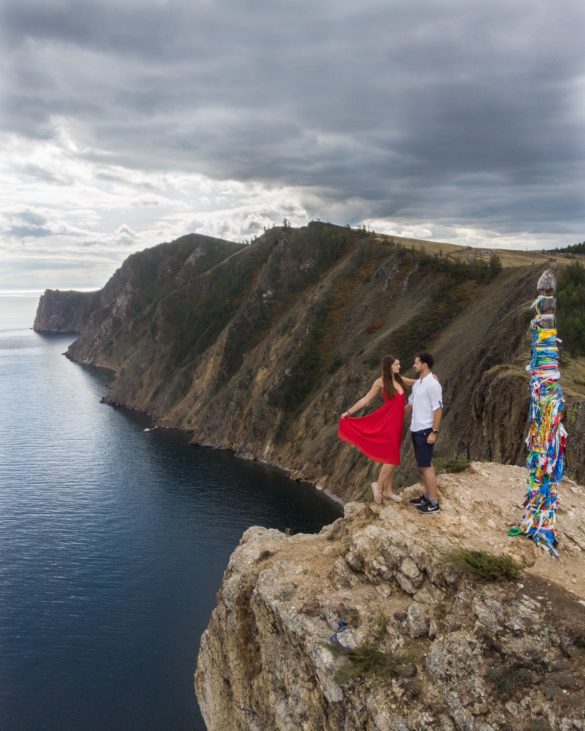 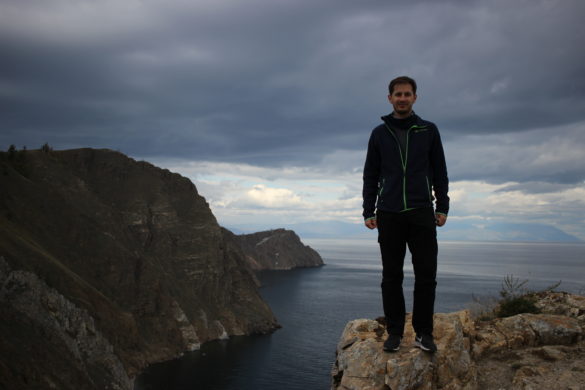 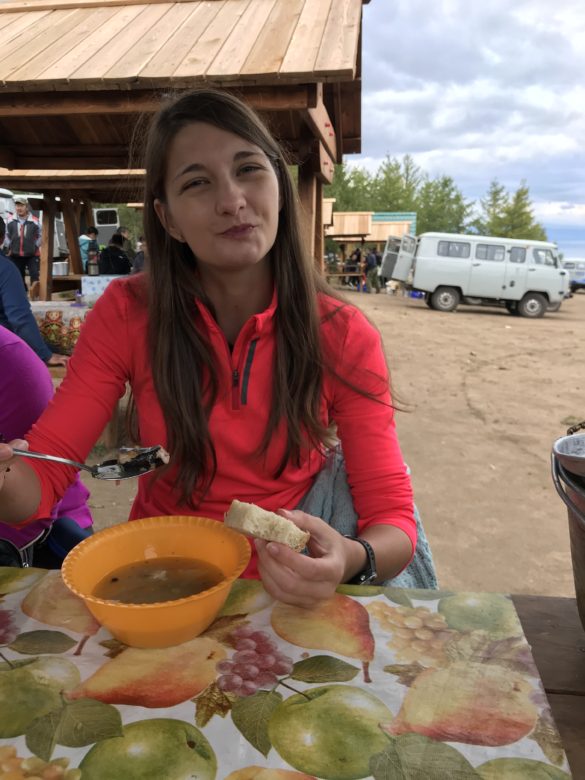 After lunch, Ilja took us to two other views, one of them was on the other side of the island, and then we went off-road back to the accommodation. 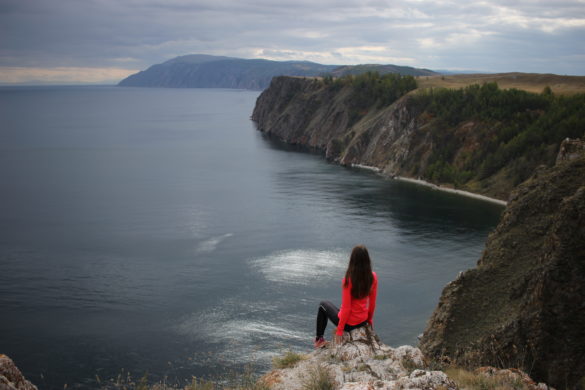 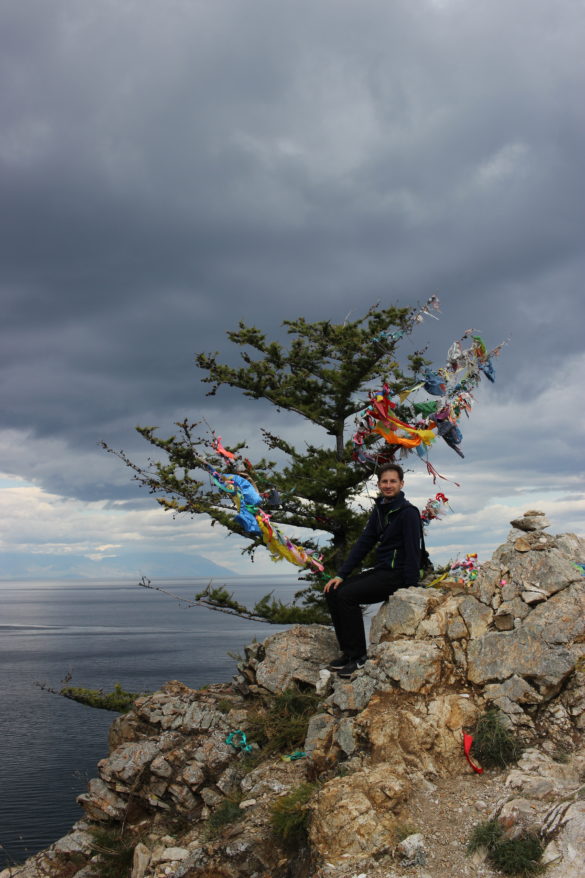 Next day we went for a walk on the island. First we went to the woods north of the city Kruzhir and then we finally reached the beach! Such a beautiful clear water, gentle ripples and sandy beaches. We felt really like on holiday by the sea. Poor Tom was ill, so he didn’t go into the water, but I put on my swimsuit, and despite the slight resistance because of the cold water, I was swimming in Baikal. We understand now why the Russians come here on holiday in the summer. This island is really a paradise and it absolutely got us. 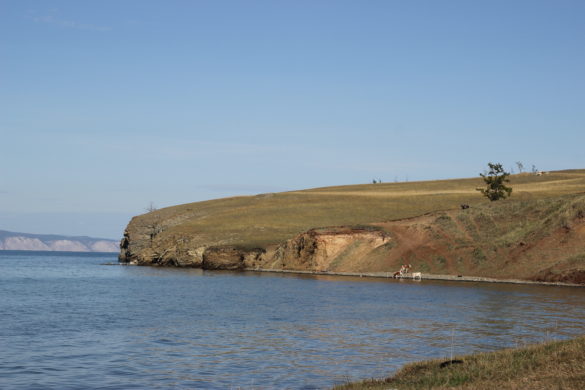 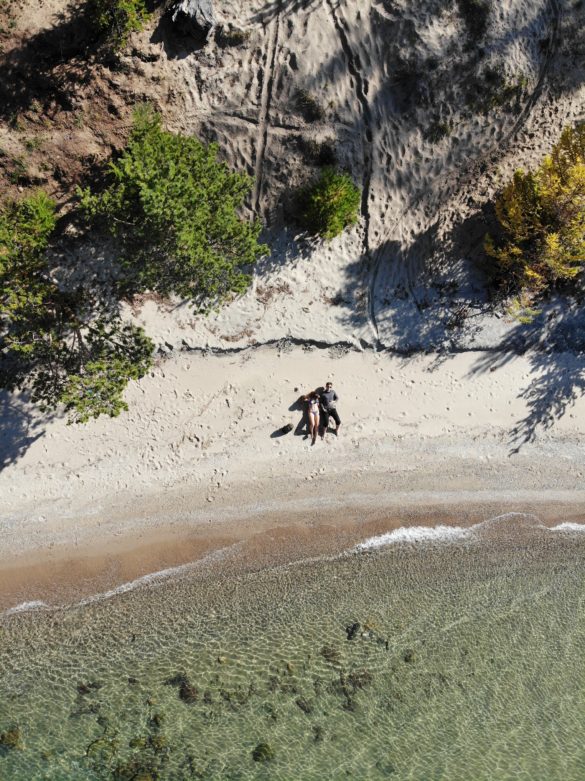 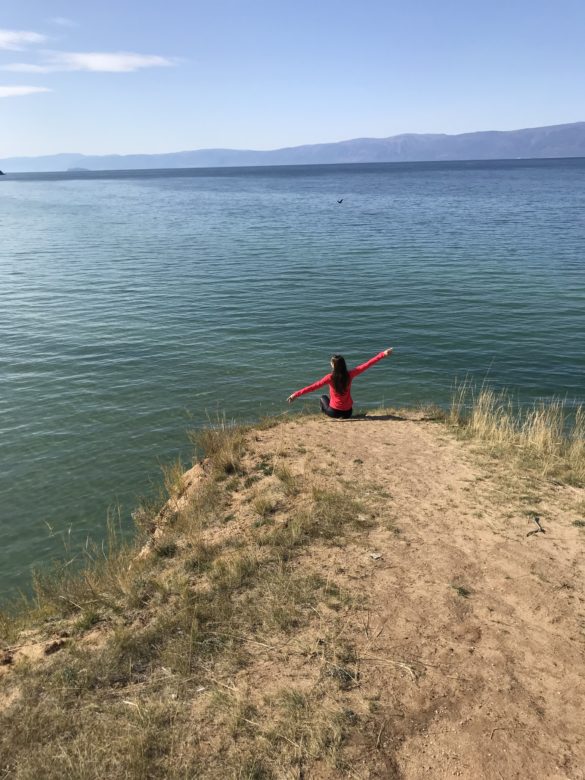 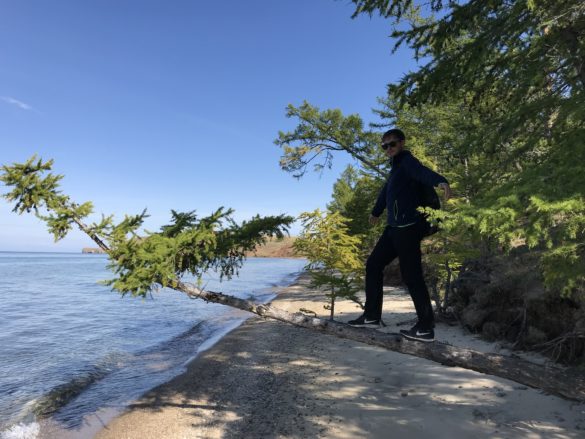 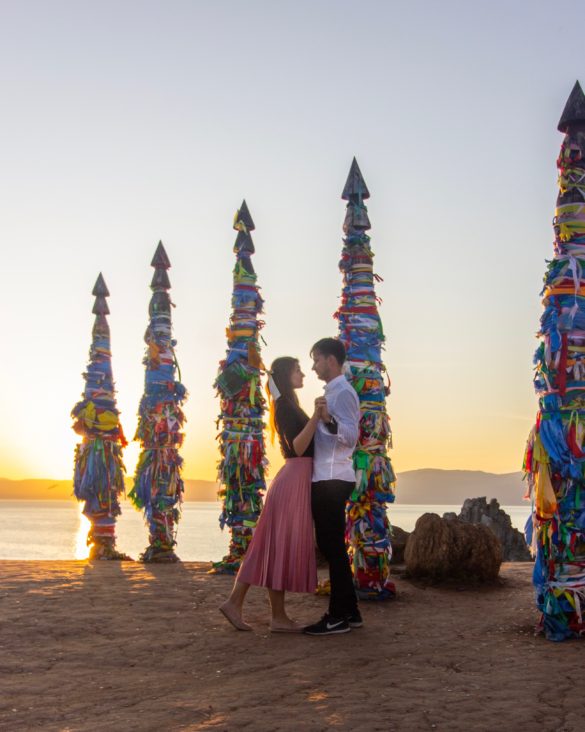 How to get from Khuzhir to Irkutsk by bus

We bought the bus tickets in advance in Irkutsk at the bus station. We decided to go at 8 am to be in Irkutsk as soon as possible to catch the bus to Listvyanka,which drove at 14:13.

But what did not happen. At 8 am we waited impatiently for the bus, but the bus did not arrive. We were sure with the bus stop because there is only one in this kind of small town and also three Russians confirmed the correct location. So we had no choice, we had to wait and hope. Local dog kept us company and also few passers  who wondered where we are come from and what we have been waiting for so long: D 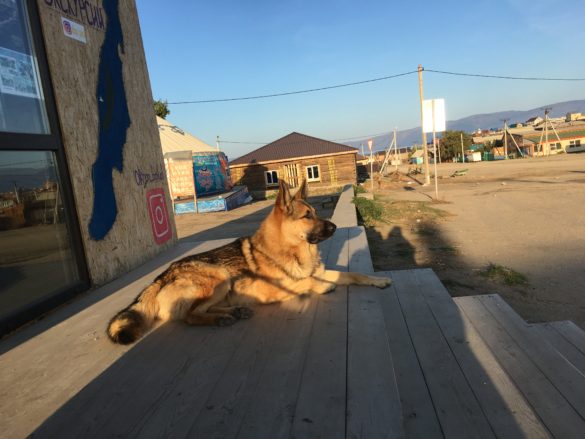 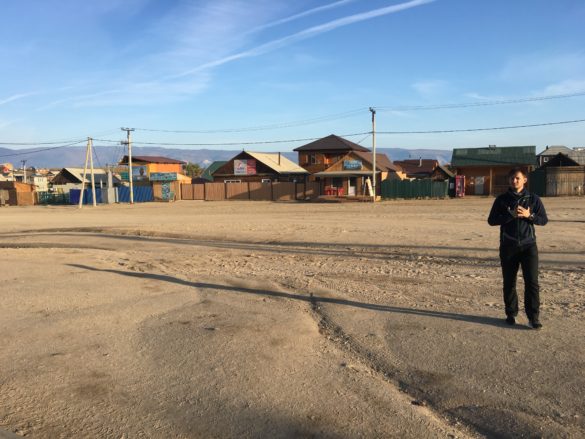 After an hour of waiting, a bus that should officialy arrived at 9 am appeared, so we asked the driver if we could go with him. He was busy, but at least he found out that our driver will not arrive until 9:30. That moment we realized that we couldn’t catch up the bus, but there was still hope in us. The driver really arrived at 9:30, but still picking up the other passengers and we managed to leave the city at 10 am! We met a Czech-German couple on the bus and finally we had a good chat with someone.

We were hungry during the lunch break, so we bought at least a bun. Why on earth do Russians put crushed potatoes inside a bun? This specialty did not impress us: D 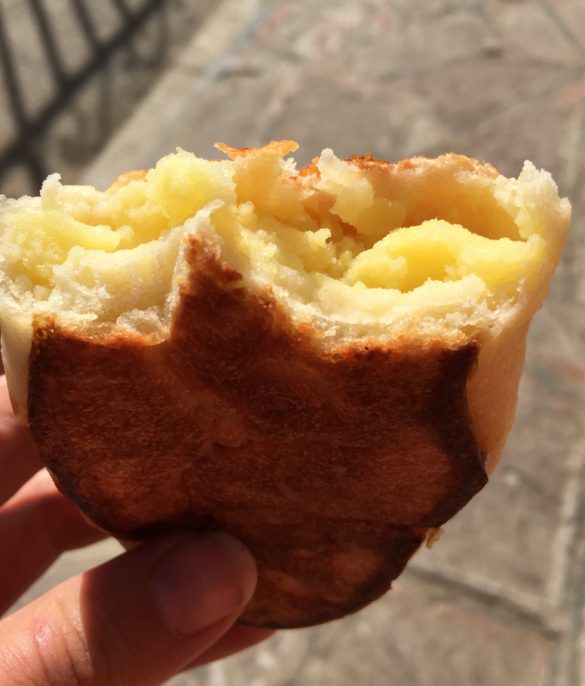 We arrived in Irkutsk at 3 pm. We had no chance to catch the connecting bus so we had to bought new tickets to Listvyanka.  Follow our next adventure in the article Listvyanka guide top things to do see

Top 5 Must – See Stops Along the Trans Siberian Railway

[…] where you can take regular minibuses or private cars. You can find articles about Lake Baikal here: Ultimate guide to lake Baikal and Listvyanka travel guide top thing to do […]