We will write the remaining days of our road trip around Taiwan in one article, because we do not want to overwhelm you too much. So we wish you a pleasant reading and with this article we will finish our amazing ride! 🙂

On the seventh day we woke up in the parking lot next to Sun Moon Lake. It is the largest water reservoir in Taiwan, which is suitable for all sports enthusiasts due to the presence of forest paths and bike roads. First we went to the lookout at the lake, which led by an official path through the forest, but it was full of cobwebs and huge colorful spiders. For Anet, this walk became hell 😀 Therefore, we then chose more pleasant places for views, Ci’en pagoda and Wenwu temple.

Then we drove across the high mountain roads back to Taroko National Park. Matouš advised us on some other nice hot springs there and we could not resist in this cold weather. We were driving on one of the most dangerous roads in the world (dangerous due to falling rocks and frequent earthquakes), which was really winding and on top of it we managed to walk to the prospect. We arrived in Taroko late in the evening, so we had instant noodles in 7/11 (we wanted to take them to the car, but we got stuck in the store because the door was blocked by monkeys) and went to sleep in the car. We also experienced our first earthquake (5,1 on the Richter scale) which was scary but fortunately short.

We woke up early in the morning because the hot springs in Taroko called Wenshan Hot Spring are officially banned. It is possible to get there, but there is a risk of a fine. But we read on the internet that the local people don’t care about it and normally go there, so we couldn’t resist this temptation either. Nowadays, there is not much left, as the original large pools were destroyed and only two small ones remained. But even so, it was great experience and a wonderful place to relax and warm up during the Taiwanese winter. During our bathing, we met about 10 other tourists in the water, so people obviously don’t bother with the entry ban. We spent the rest of the day in the car traveling to Yehliu. 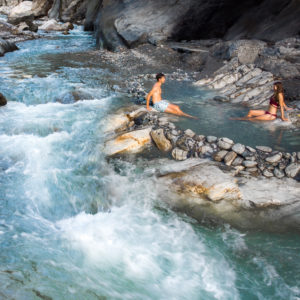 Immediately after waking up, we went to Yehliu Geopark to overtake all eager Asian tourists. You can find there unique geological formations and the most popular is Queen’s head (photo on the right).

The stop at the Laomei Green Reef failed completely, as we did not check the tide times in advance. This place is best to visit during low tide, as most green cliffs are revealed. Never mind, we walked to the Fuguijiao lighthouse and the northernmost point of the island of Cape Fugui. But we still got to the cliff on our last day, because we were looking for a place to sleep for so long that we reached its parking lot :D. This time we got up at low tide and it was a much better and nicer 🙂 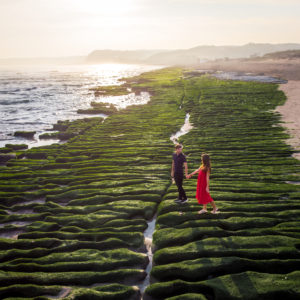 But let’s get back to the program. We continued further, because we urgently needed to take a shower and we can not find any open camp in the area. Once again we are saved by hot springs, this time Ba Yan Ye Xi Hot Spring. These hot springs are officially closed and banned, but locals still go there. We believe that they were closed because they are located near Taipei and were visited by too many people. At least that way reduced tourists. The road to the hot springs was very adventurous, because it was raining, there was mud on the road and we had to climb over a wild river. But behind this dramatic journey we were amazed by hot springs, which were the largest of all we visited in Taiwan. We could choose from several lakes depending on whether we wanted hot or boiling water :D. Tom even got scalded in one stream! We enjoyed the hot springs followed by bathing in the cold river 🙂 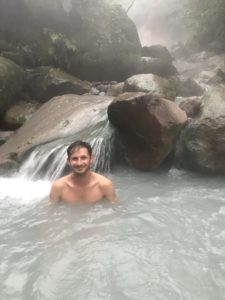 Next day of our trip, we had on the program Yangmingshan National Park, specifically the volcanic area of Xiaoyoukeng. One can literally feel the volcanic force here, mainly due to the intense sulfur smell. Steam is constantly flowing from the rock and the surrounding lakes are literally boiling. It is a little scary that the active volcano is located not far from the capital city. We went here for a walk to the highest point of Mt. Qixing, but unfortunately for us, there was a national holiday in Taiwan, so we fought with crowds along the way and we didn’t take a photo on the top, because there was a queue waiting for it :D. 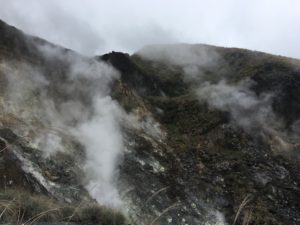 And our last stop is the Tamsui area and the so-called Lover’s Bridge. It’s a nice area with a promenade around the sea, but it would probably be even nicer in better weather.

The last day of our amazing ride has come. As we mentioned above, in the morning we managed to visit Laomei Green Reef again and then we quickly rushed to the car rental. The owner was very nice again, everything was without a problem and we became ordinary people without a car again 😀

Taipei 2 day Itinerary with must things to do and see

We’re a group of volunteers and starting a new scheme in our community.
Your web site offered us with helpful information to work on. You have done an impressive task
and our whole neighborhood will likely be thankful to you.