Taipei 2 day Itinerary with must things to do and see

We returned our car and were already looking forward to slowing down, sleeping in a real bed and taking a hot shower. After a week of intense road trip, one begins to realize how the basic physiological needs are sometimes underestimated 😀 We had two days left in Taipei, so The next day we woke up early in the next morning and went to explore the capital of Taiwan. We regularly replenished our energy with bubble tea, which Anet completely fell in love with and became almost addicted to it 😀

9 Must visit places in Taipei 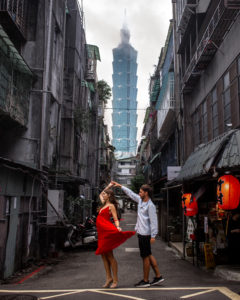 Chiang Kai Shek National Monument in Taipei is a popular tourist place to visit. Chiang Kai Shek was the first president of Taiwan an important figure in Taiwan formation. In addition to the memorial, there is also the building of National Theater and the National Concert Hall in the area. The monument is in the shape of a octagonal, as they believe in local culture that it brings good fortune. The roof of the building is decorated with blue and red roof tiles, as they are the colors of the Taiwan flag.

Elephant mountain  is a popular view of the building Taipei 101.  You can come there via the Xiangshan or Huashan hiking trails. This place is ideal for a walk and escape from the city centre. But we made a mistake and came here during the weekend. On the way up we met crowds of people on the stairs, then waited for over half an hour for a famous photo spot on a rock and finally hardly found some place to watch the sunset behind Taipei 101. We really recommend to avoid this place during the weekend or some holiday 😀

We just walked through this park, but we really liked it. It was very large so we could imagine going there for a run. There were also various decorations, attractions or ponds and it was an ideal place to relax.

If you want to taste something typical for Taiwan, try stinky tofu. It stinks, so you’ll know the presence of his salesman right away 😀 Tom tried it, but Anet didn’t dare, because she wanted to vomit just from the smell:D And if you want a sweet dessert, buy a pineapple cake (pineapple in shortcrust pastry). It’s a typical dessert and they sell it in most stores 🙂

Visit Taiwan and don’t see any Buddhist temple? No way! 😀 We have already visited several during our road trip (we recommend the temples in Kaohsiung), but there are also very nice temples in Taipei. The most famous are Lungshan Temple, Taipei Tianhou or Qingshui.

Well Taipei 101 is simply an iconic building and most photographers compete to get the best and most original photo. Of course, we were one of them and for at least 2 hours we were looking for a building where we could get to the rooftop. It was an adrenaline experience because the building was terribly high, was windy and cold…not the best conditions. On the other hand, the ledge was wide enough and we didn’t feel in danger. If you also want to find such a view, then take a look at Instagram, where you will find a lot of inspiration. 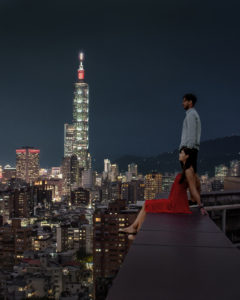 This place was recommended to us by Anet’s sister, who was in Taiwan a few years ago. At first we didn’t like the idea but finally we came here and it was really unique experience. The planes took off and landed not far from us, and when we were sitting on the fence (see photo below), it was not a completely pleasant feeling :D. The exact location of this spot is 飛機巷 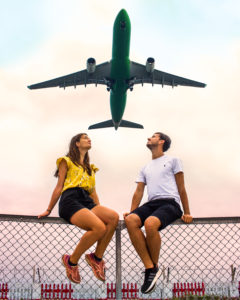 The last, but not least place are restaurants which serve the popular Taiwanese delicacy Hot Pot. It is called for a method of cooking where you can cook your own food in soup (broth). The most popular combinations are slices of meat, meatballs, tofu, vegetables, offal (we did not dare to do that) or seafood. Popular but more expensive is the TIGI hot pot, we tried this hot pot 春風 堂 川渝 麻辣. But you can find there a lot of restaurant in Taipei, so just go somewhere you like 🙂 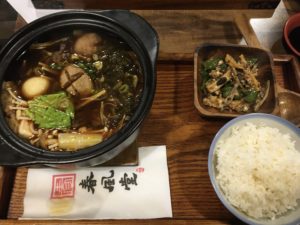 How to get around Taipei

There is modern and reliable public transport in Taipei. We used the metro every day plus we liked to walk. Finally, after a long time of traveling around SE Asia, we experienced wide sidewalks and we lacked the feeling that one can walk and not have to dodge motorcycles 😀 Metro is about the same price as in Prague, but much nicer.

Another great way to get around Taipei is by bike. City is flat, no hills and, unlike other Asian countries, there is no chaos on the road. The city offers service called Youbike, which can be used with the Easycard. A necessary condition, however, is to carry a local telephone number, which is used for verification. 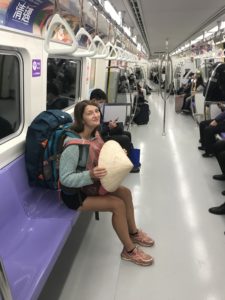 How to find cheap accommodation in Taipei

Firstly we have to say that finding cheap accommodation in Taiwan is almost impossible. Taiwan is one of the more expensive destinations in Asia, but it certainly doesn’t destroy your wallet 🙂

On Airbnb you can find affordable rooms even in central part of Taipei. However, we definitely recommend searching in advance, as cheaper variants are disappearing quickly.

Fortunately, there are popular hostels in Taipei. So take a look at booking.com and find the one that suits you best for its location and amenities 🙂

If you don’t mind a small room with a bunk bed, we recommend Daan Park Hotel, where you will also receive free water, coffee or tea :). We really liked our stay there because it was close to main tourist attractions 🙂