Former capital Hue – our experience with must visit places and restaurants

Hue was the capital of Vietnam from 1802 to 1945. There was also a battle for Hue during the Vietnam War, which was one of the bloodiest and longest. The city is located in central Vietnam and flows through the Perfume River, around which is a nice promenade. Historical monuments in Hue include the Royal Palace of Imperial City, which is similat to the Forbidden City in China and is listed in a UNESCO World Heritage Site. 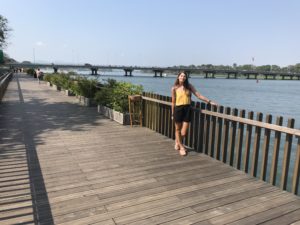 What we saw and visited in Hue

We had only one day in Hue city, which was definitely not enough and we recommend at least two days. So what did we do in a short while? 🙂

Imperial city is a huge complex and fortress of the former imperial city of Vietnam. There are several gates, courtyards, temples, gardens and pavilions. Unfortunately, we missed its visit, because it is a really large area that requires at least 2 hours. But we have a photo for  you at least from the main gate: D 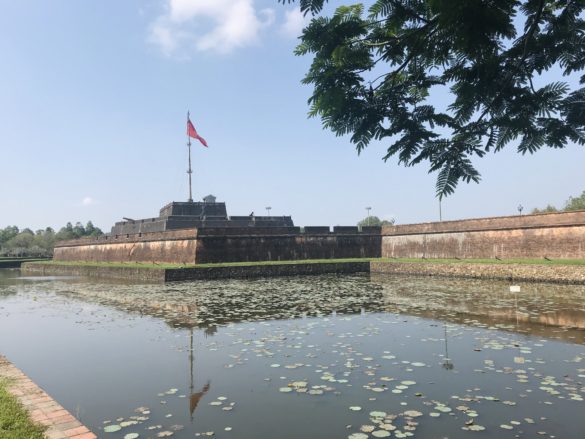 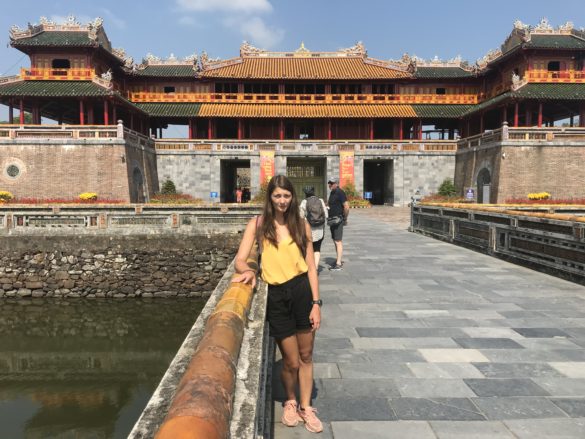 The Buddhist temple is one of the most famous monuments in the city and is also a symbol of Hue. The iconic building is a seven story pagoda from where is a magnificent view of the river. It is located about 5 km from the center. We walked there because we were looking forward to a walk along the river. It is possible to get there also by motorbike, bike, boat or taxi. 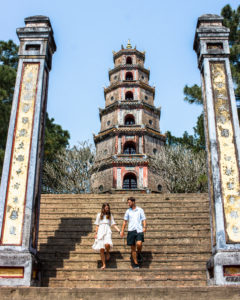 We do not know why or what happened, but the very expensive water park, which was built 8 km from the center of Hue was closed and is now gradually decaying. According to official information, there is no entry ban, but everything was wrong with our visit from the beginning! We drove to the waterpark on a motorcycle and about a kilometer before our destination, women chased us into the parking lot and told us that we cannot continue on the road. We trusted them, parked at their parking spot and paid 10,000k, hoping they might be watching our bike. We weren’t the only ones, so we trusted them. After a few meters, however, we realized that this way through the woods is not official, and the “security guy” on a motorcycle told us that we can’t go this way. But we saw people coming from there, so we just went on. We had barely passed the refreshment stall and another “security guy” came to us on a motorbike. He had written on the paper that we cannot not go inside and it is forbidden. But we still saw people coming from there, so we tried to argue with him and then we just went on.

Well, the story continues. The third guy on a motorcycle rode around and tried to scattering people with a whistle. So we tried to take pictures and then we ran to hide behind some wall. But the guy rode his bike around and there was no chance of avoiding him. So after 15 minutes we just ran out of the hiding place, took a picture and went, it was really stressful and not worth it. Along the way we saw new and new tourists arriving, so we would like to know what happened to them: D 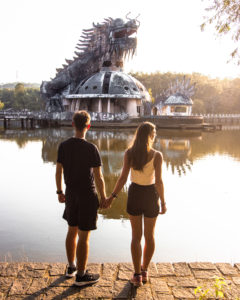 Famous road leading from Hue to Danang on which is best to ride a motorcycle. To learn more about this adventure, read our article Hai Van Pass adventurous motorbike ride. 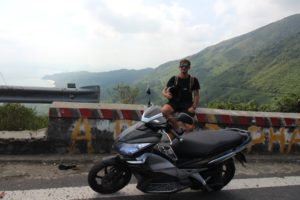 Finally, we have tip with two nice restaurants in Hue. One of them is a classic family business and the other one is more luxury one 🙂 But in both of them is a pleasant atmosphere, which created by nice service and delicious food.

Located in the center of Hue, this restaurant has traditional Vietnamese noodles with pork and peanut sauce. As an appetizer, we had fried spring rolls that tasted completely different than what we’ve tried so far. We recommend that you make a reservation in advance because it is very popular with tourists. 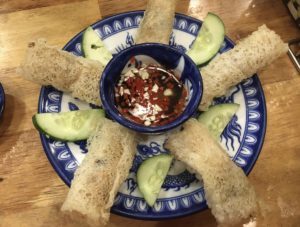 A typical Vietnamese family business, with only three dishes on menu. But at least two of them know it’s worth it. In addition, the price is around 30,000 VND (1,5 EUR), which is unbeatable! Ideal stop on the way to Thien Mu Pagoda 🙂 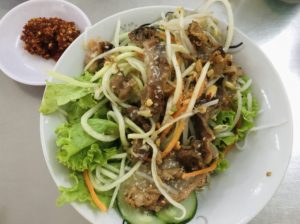